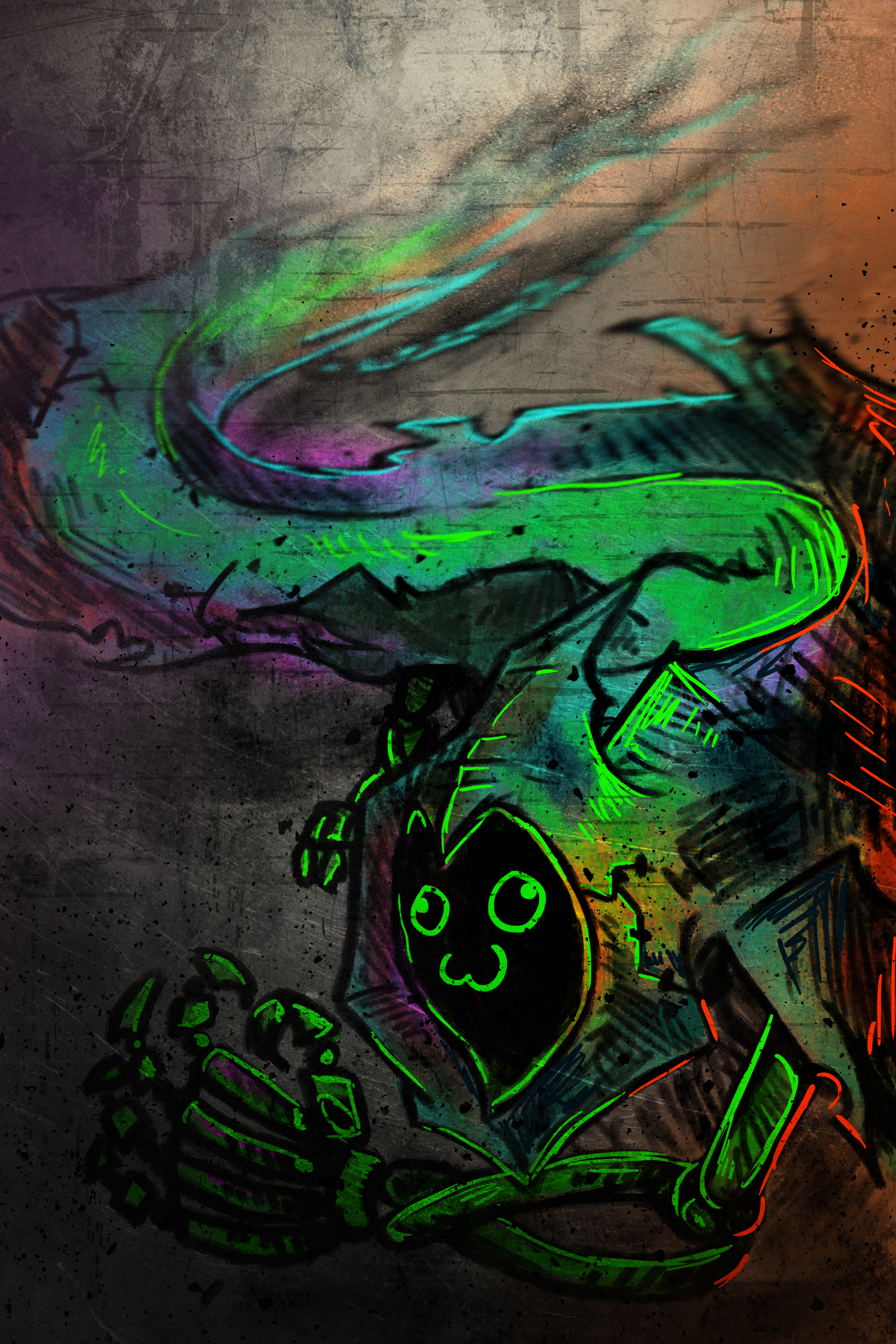 It flows nicely into the background, and those bright green highlights really pull the image forward.

The purple and green work very well together and are blended in an eye-pleasing way. The way the lines are solid up front but fade closer to the back do a good job of showing him coming forward from a distance (or out of mist/darkness) and bring the image forward.
Not sure if this was the intention, but with the wall-like background it almost looks like graffiti. The red light source on the right side is very powerful and a great addition. The sharpness of the spine-like area is very well-shaped and interesting to look at. The purple highlights make it look very ghostly/otherworldly, and the lighting is powerful in contrast with the darkness.

Even though it’s sort of a joke addition, the really bright cat face inside makes it pretty difficult for me to visualize what it might look like without it as it’s just so bright and bold. Also, to me, the fact that it’s such a perspective-oriented image makes it hard to see it put onto what looks like a flat wall-like background (maybe it was just the background colouring style if a wall wasn’t the intention). The eye tries to see it as a flat image on a wall while the image itself wants to come forward and be a 3D-looking picture and to me, they don’t mesh as well as they could.

4. What do you think the artist can improve upon? suggestions?

The hands are interesting and bold. One is not 100% sure if they’re skeletal or biomechanical or a bit of both; you could lean either way. (A bit more bolts/screws = biomechanical looking, a bit more curvy/natural-bone-like and you’d have it looking very skeletal as the current boxyness sort of looks more robotic than natural.)

Think about considering a background style that fits with the dynamic-ness of the image; this one seems too wall-like and bright while the image looks like a creature out of darkness coming from behind.

If I were to change something, it’d be a bit more black darkness near the front, as there’s a bit already and it looks great, but shrouding it in just a little more shadow would give it that creepyness that I think it’s beginning to show fairly well already.

(Could be 3 with a bit more contrast/shadows and less of a flat-wall look, unless the graffiti-style is what you’re aiming for)

Great stuff, thanks for showing!

Sam’s 2 cents
First off, I really love this style. As said its like a Graffiti on the wall kind of art. I can never do such a style, I;ve tried, I’ve failed so hard xD
This is done really nicely from the colours to the BG wall. Really like it.
For help on colouring I would say:
Maybe the highlights could blend a little bit more into the image. for example perhaps instead of such a vivid green or red choose a more dulled down one. That being said you can do the opposite and add a more vivid colour leading up to the highlights! ( I would choose this method ). I might even go for a yellow over the green.
I would also add in a little bit of blue somewhere. You have blue on the back but not really up on his head. I think adding a teeny tiny touch can bring the whole piece together even if it was only in the shadows.
Other the that I might suggest sharpening the outlines (or darkening them) at the head. I think that would add more depth making the tail look more blurred then the head which is closest to you.
Looks great, always a pleasure to see what you are working on and what you have finished 🙂