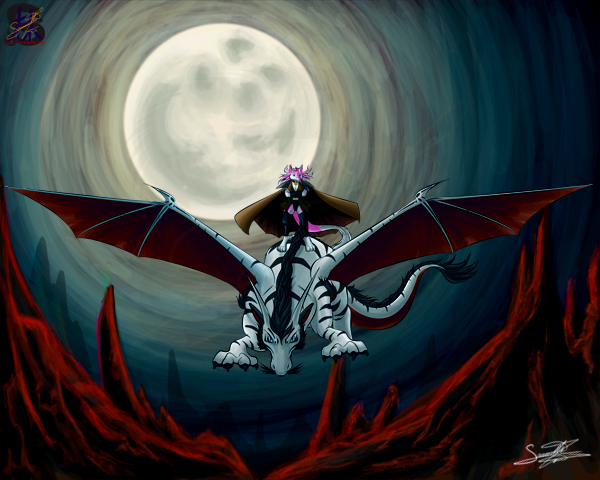 This was an combined commission I did for 2 people. The dragon is actually a hybrid and is created based on a Tiger character. For this image I found the most challenging part the lighting, both on the characters and the cliffs below. Some help on that would be much appreciated. I tried to stray away from total darkness on the front of the characters as it was not very appealing and I felt that a lot was lost. However I do feel that it could be darker, just not quite sure how I can pull that off.

Crit by Fablo
1. What I like about the picture.

I really like the atmosphere that the picture leaves. The bright colours radiating from the moon, to the darker colours down at the rocks. Though there is a lot of red on the rocks.
The composition is also nicely done, with the foreshortening of the “dragon/tiger creature”
The characters in the picture are well designed, and their “so” design in this picture fits the rest.

2. What I dislike about the picture.

The first thing I saw on the picture would definitely be the dragon/tiger creature, but my eyes were zooming quite fast in on the rocks. They are so bright that they almost overshine the creature and the rider.
The pink colour on the rider is also a bit too bright when you think about it, since he/she is supposed to be under a cape when I suppose the light is coming from the moon?
The light on the cape is also a bit too “warm” with a yellow light instead of blue.

No critique on the anatomy and general perspectives except I am having trouble finding out if the creature is directly above or in front of the rocks. All else of the picture have been done very well 🙂

3. What can you do to improve.

Let’s start off with the lighting, a bit more darkness would make this a lot more atmospheric, don’t be afraid of making the faces a bit darker since they are pointing away from the light source. Of course don’t go nuts and make them all black their faces must still be visible, but it would be a nice touch to make the inner parts more dark the further they are away from the light source, fx. the muzzle of the creature could be a bit darker, and the inner parts of the legs. same with the pink on the rider. He/she should just have a lot more darkness when he/she is under a cape.

Now the colours, Most of the colours are pretty well made (Then moons glow and such) But there is just so much red. Like there is only 1 shade of red on the rocks I assume the rocks are just beneath the creatures wings, in that case there should be lighting from the moon hitting the rocks as well. The colour of night is typically a “colder” colour, unless there are explosions but thats out of topic, so to simulate the moons light it should have been more blue (pointing out on the cape) Just a bit change from using orange, yellow and red to more blue, purple and green when it comes to painting/drawing light in the dark.
To the wings now, 2 things here, 1. If the creatures wings are the source of the red light I would suggest making them transparent to better show that the light is going through the wings. 2. if the rocks are giving out the red light then they must have a clear source for that light, can’t just have random light everywhere. (A suggestion would be to make the red light come from the ground by making the ground glow as well) of course that is only if it’s step 2 here that is the right one.

All in all a nice picture with only a few flawes in the lighting and a tiny bit unclear positioning.