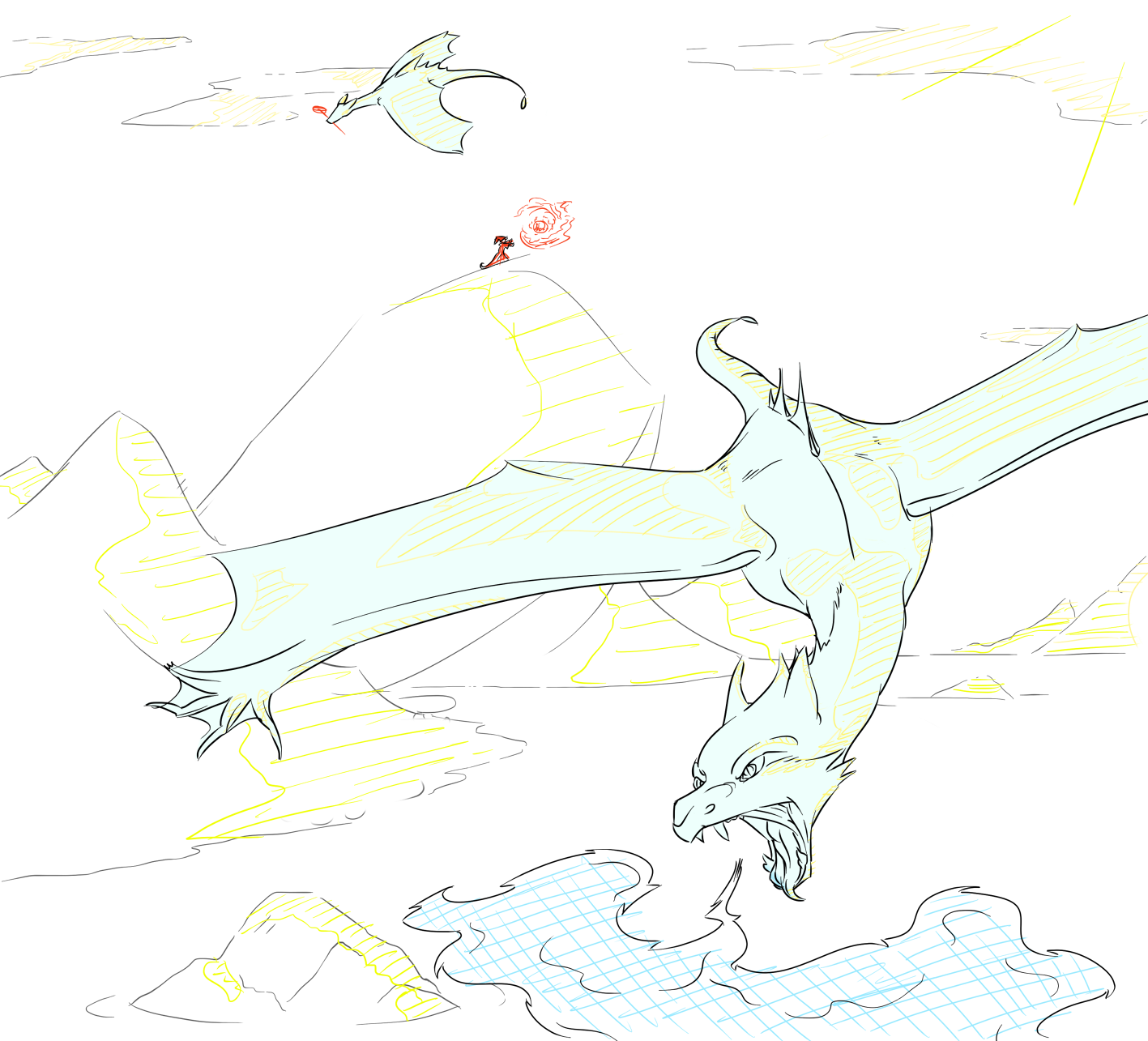 “A fantasy battle in the north; a dark mage takes on ice-sharded dragon twins in pursuit of recognition for his high-class magical abilities.”
My main goal for this is to have a strong sense of good and bad, so I plan on having a lot of shadows & light fill the scene rather than major detail. I only want a select handful of colours to work with, though I’m still trying to figure out a good colour scheme to fit. People tend to think that a human is always in the ‘right’ and that dragons are made out to be the antagonist in any story, but in this piece it’s quite the opposite.
Ah, and I’m quite iffy on the light-source. Maybe dawn/dusk would be better?

Critique by Qrekords
1. First impression
I really like the ideas behind this piece, and the overall general concept, its quite interesting, very different and original
2. What do you like about this image?

I really like how the image tells a story, and how that story is something that is rarely told, I have only read a few accounts were the dragon was not “the bad guy” in it, and those were quite old and rare books, also I’m quite fond of the dragons wings, and the whole design of the dragons, in fact I would go as far as to say that the dragons are perfect except for one flaw, which I will point out in the next part of this. I love the background and setting. When you add color to it I would love to see how it turns out.

3. Is there something you don’t like?
The main thing I see about this that I don’t like is I find something missing. With the dragon in the front I think you should be able to see a bit of the underbelly and legs/arms from that angel and distance. That’s the main thing, other than that, I really like what I see.

4. What do you think the artist can improve upon? Suggestions?
There could be a bit more detail to the landscape, or some shading.Does this dragon have arms?

Sam’s 2 cents
I like the overall composition and use of the positive and negative space. I dont feel like there is too much negative or positive space, a very nice balance was achieved in this piece. It seems very friendly to me, like the dragons are just playing, like the guy stealing the staff and the main one in the front seems like a child looking at their breath in the winter. But we know that the dragons are getting ready for battle, giving the feeling that the wizard is in the wrong. I can’t wait to see the finished coloured image.